The future of Oxygen Builder? My thoughts after the Breakdance launch 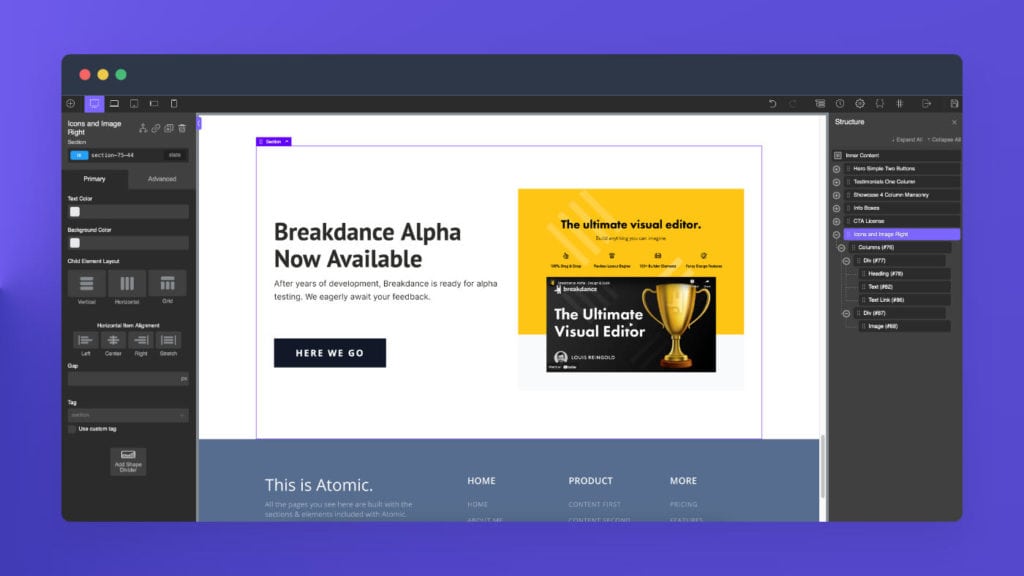 My very first newsletter back in October 2021 was about the future of Oxygen, and here we are again after a short hiatus.

I re-read that newsletter, and wow, everything played out almost exactly like I thought it would.

Oxygen will be continuing business as normal, there's no major re-write, and Soflyy launched a new user-friendly page builder.

The writing was LITERALLY on the wall for everyone to see.

So why have the last couple weeks been such a crapstorm?

And even more strangely, why did the launch of Breakdance feel different than I thought it would?

I deliberately waited a couple weeks before writing anything about it. I wanted to let emotions settle, see how things play out, and reflect on it rationally.

Here's where I'm at.

The Launch of Breakdance

Some people are really upset that Louis & team launched a new page builder.

I can see where they're coming from. It's the shiny new builder in town and they're getting all the attention.

I honestly have zero problem with it though.

While Breakdance is a page builder, it's not meant to be a direct competitor to Oxygen. It's for a different audience and solves a different problem.

This strategy isn't unlike Volkswagen Group selling cars under the Volkswagen, Audi, and Lamborghini brands.

Each brand serves its own purpose, completely dependent on your lifestyle and usage.

Even if Lamborghinis are objectively better cars, they're not a better car for the average commuter.

Even though this distinction in use-cases is pretty clear, the Breakance launch campaign muddied the waters.

Hindsight is 20/20, but let's look back on where the launch may have gone wrong:

That last point sounds more like "Hey do you use Oxygen? Well that sucks because here's a new builder and it's way better."

It should have been communicated as different, not better.

I think this is the basis of why most people felt betrayed.

Lesson learned for next time I'm sure.

What happens with Oxygen?

As I mentioned in my initial newsletter, I was fully expecting 'business as usual' for Oxygen. I wrote:

"Oxygen is a mature product that is used on hundreds of thousands if not millions of websites. It needs refinement more than it needs a complete rewrite."

This is still the truth.

HOWEVER, after watching the interview between Jonathan Jernigan and Louis Reingold, it's not sitting with me the way I thought it would.

I felt a bubble burst.

I've always viewed Oxygen as 'mature in a good way', but the interview made me realize that maybe I wasn't seeing the entire picture.

We heard things like "Oxygen is a legacy product," "I wish we could've done this with Oxygen," "Oxygen is a niche builder", "we tried changing the pricing" (not exact quotes).

It felt more like an air of defeat than a product I should still be excited about and base my entire business around.

The curse of lifetime deals

The narrative up until recently has been that Oxygen's one-time payment structure has been extensively tested and is most optimized for revenue.

People in the community have brought up the topic of switching to an annual payment in the past, with some people even suggesting they'll buy the LTD over and over again just to support the product.

We've seen way too many companies die over recent years because they couldn't support the recurring costs from their LTD customers.

But the general response from the Oxygen team has been "don't worry, this is working for us."

It wasn't until the Breakdance launch that this stance seems to have changed.

Oxygen isn't solely a mature product because it has so many users, but also because its growth potential is limited by its pricing model.

This shouldn't come as a shock, but suddenly it feels like the LTD is an issue.

Business as usual... but not totally

Let's put any emotions and hypotheticals aside for a moment.

Let's make the assumption that Breakdance was never built to replace Oxygen, and that Oxygen's development will continue at the current pace that we've all been mostly satisfied with.

On paper, nothing has changed. It's still an excellent builder and will only continue to get better.

However, we can't overlook the fact that one thing DID change.

Some of Oxygen's top content creators have made public their intent to move on from the builder (ex: Jonathan), and I've seen hundreds of users voice a similar sentiment in the comments and in other Facebook groups.

That bubble-bursting feeling seems like it was shared by more people than just myself.

It's like being at a house party, but all the cool kids have left. What now?

Where to go from here?

This is the part I've struggled with the most.

Just because the cool kids have left the party, doesn't mean the party is immediately over.

It's more than likely that time will pass and the community will re-establish itself.

Oxygen is still hands-down the most powerful page builder on the market, and it's in good hands with Elijah running it.

I also believe there's a solution to every problem.

Business models can be adjusted, and community relations made a priority.

It all depends on how much the Oxygen team actually wants to address the issue.

*This is also the weird thing about lifetime deals. Technically you're incentivized for your existing customers to stop using your product.

As for right now, I'm going to continue to use Oxygen, but I've certainly opened up to other options on the market (I'll talk about these separately).

I don't want to become a legacy web designer.

Should you start rebuilding all your Oxygen sites with a new builder?

Heck no. That's usually a bad idea and a waste of time.

I'm just testing and keeping my eye on other options that might have more future upside.

Since we're on the topic, here are my initial impressions.

It's cool that Breakdance took the functionality of Oxygen and paired it with a simpler interface.

Breakdance also has a few things I wish Oxygen had.

I'm curious to see how they're going to go after Elementor's and Divi's market share.

I think they still need to dial-in their positioning, but that's the kind of thing that can emerge naturally during the beta testing period.

If their primary audience is going to be non-techies, they'll need to pump out pre-built sections so that any user can slap a few sections together and not have to worry about what padding and margin are.

Based on my first tests, would I recommend it? Yeah.

Will I be using it myself? Probably not.

I personally want to drive stick, not automatic.

That might not be the case for everyone else.

First off, thanks for reading through all the way to this point.

My goal with this article was to recap how I was feeling about everything that's happened in the last few weeks - as transparently and unbiased as possible.

Truth is, controversial topics like these can be difficult to discuss. I've had nothing but a great relationship with the Oxygen team & various members in the community.

At the same time, much of our lives revolve around web design, and the tools we use are a big part of that.

It's healthy to communicate and openly discuss our thoughts. It's not a personal matter.

I didn't take hours out of my day to write and revise this x1000 because it's fun.

(As long as it's respectful and constructive of course. Not everyone has gotten this part.)